Jamie Lee Curtis is set to star in Halloween Kills, an upcoming sequel in the Halloween movie franchise. Halloween ­Kills is scheduled to be released later this year[1], and is the twelfth film in the franchise.

Coincidentally, Jamie made her debut on film over four decades ago in the 1978 film Halloween, which was so well-received that it spawned the Halloween franchise. In Halloween Kills Jamie will again be playing Laurie Strode, the sole survivor of Michael Myers’ killing spree, in a continuation of the plot of the original 1978 Halloween.

Jamie has starred in a long list of movies including Trading Places, Perfect, A Fish Called Wanda, Blue Steel, Anything But Love, Mother’s Boys, True Lies, Freaky Friday, Scream Queen, etc. She has won numerous awards for her acting performances.

Jamie has also authored quite a number of children’s books.

While Jamie is perhaps best known as an actor, did you know that she is an inventor as well? Yes, Jamie Lee Curtis has invented improved diapers and has received two U.S. Patents directed to them.

Jamie’s first patent, U.S. Patent No. 4,753,647, issued on June 28, 1988 and is directed to a diaper with a sealed front pocket. The front pocket contains one or more wipes inside for cleaning an infant when the diaper becomes soiled. This configuration is designed to solve the problem of not having a baby wipe at hand when changing diapers, or otherwise being burdened with carrying a package of wipes at all times, even when traveling.

The writer of this article can relate to the problem solved by the invention, and would have certainly appreciated diapers pre-packaged with wipes during numerous occasions when changing his infant’s diaper and searching – but not finding – wipes in the near vicinity. 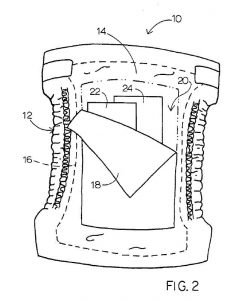 This design is clever not only in that it provides a caregiver with wipes when needing to clean an infant, but also because it takes advantage of the outer layer of the diaper being moisture-proof in sealing and protecting the wipes inside of the pocket. Thus, the wipes remain clean inside of the pocket even when a baby soils the diapers.

Jamie’s second patent, U.S. Patent No. 9,827,151, issued on November 28, 2017 and is directed to a diaper with a built-in plastic bag for disposing of the diaper after use. Thus, after an infant has soiled the diaper, the diaper can be inserted inside the bag and the bag can be sealed. This will ensure that the contents of the diaper remain inside of the bag, and importantly, prevent odor from being released outside of the bag.

The plastic bag has a certain length and has an open end that is not attached to the diaper. After the diaper has been used and soiled, a caregiver would open a flap providing access to the interior of the front pocket. The bag would then be pulled out of the pocket (by pulling the open end of the bag out) while the closed end of the bag remains attached to the diaper. After cleaning the infant, the caregiver would roll the diaper into a ball-like shape and place the rolled diaper inside of the bag by turning the bag inside-out on itself (a gesture that resembles picking up pet poo by placing one’s hand inside of a bag to retrieve the waste and then turning the bag inside-out). The open end of the bag can then be tied into a knot to seal the odor and the contents of the diaper inside of the bag.

A representative image of Jamie’s second patent is provided below to illustrate the bag 28 after it has been pulled out of the pocket, the open end 28b of the bag, and wipes 30, 32 and 34 placed inside of the pocket for cleaning an infant.

The benefit derived by utilizing such diapers is readily apparent to parents and caregivers who might not have the time to search for a plastic bag after cleaning up an infant and/or might not have a plastic bag available within reach, thus, simply discarding used diapers in the trash can, leaving the odor uncontrolled.

As can be gathered, Jamie is multi-talented and her inventions can significantly improve the lives of parents and caregivers of infants alike!