Unless one is living in a bubble, one is well aware of the online game called WORDLE. Since the beginning of the year, Josh Wardle’s online game has quickly became an internet sensation. The New York Times in fact paid a small fortune for the rights to the WORDLE game. 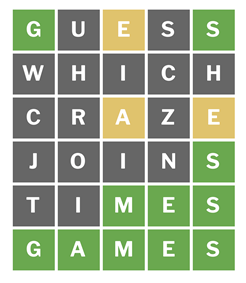 Surprisingly, the WORDLE online game does not appear to be all that creative. From an intellectual property standpoint, it seems, at least at first blush, that the WORDLE game as it is played, including its use of colored boxes in a grid, seems somewhat similar to an old rather obscure TV game show called LINGO.

Like WORDLE, the LINGO television show had players trying to guess five-letter words on a gridded game board where boxes change colors based on the accuracy of the players’ guesses. Admittedly, there are some differences, including WORDLE using different colored boxes and LINGO starting players with the first letter of each word.

Historically, LINGO first aired on TV for a limited run in the mid-1980s. It later was broadcast on the Game Show Network in the 2000s.

The question is then raised: do the owners of the rights in the LINGO game have any type of operable IP infringement claim against Josh Wardle and/or The New York Times. Probably not.

From a patent standpoint, there is clearly no viable claim. While patents can, in some circumstances protect the implementation of software in a specific way, WORDLE is an online game, not a television game show, and therefore the execution of the software code that was developed by Josh Wardle has no real connection to the play of contestants on a game show. More importantly, as patents only have a 20-year life span, any issued patents relating to the LINGO game that could have been granted would have expired a long time ago.

Trademark law also does not apply here. A trademark protects product names and logos that are source indicators. The WORDLE name is completely different from the LINGO name, precluding any type of confusion among consumers.

In general, copyright cannot be used as a way to protect the way a game is played. Arguably, copyright can protect, in a very limited way, how a game, or any other type of creative work, is distinctively presented and arranged. It is hornbook law, however, that copyright does not protect concepts or ideas. Therefore, the owner of the rights in a particular game cannot stop someone else whose game is played in a way that is similar to the way another game is played.

Indeed, the existence of the LINGO TV game does not prevent one from legally creating a related online game involving five-letter words, even if both games use colored boxes incorporated into a grid arrangement. The grid design of the LINGO TV game is in fact extremely simple and is certainly not very unique in presentation. This further limits the scope of any copyright rights that exist in the LINGO game.

Simply stated, there is not much the copyright law can do to stop five letter guessing games from existing. So the WORDLE phenomenon will likely continue unabated until the next online game craze makes its dramatic debut.