Skip to content
Publications > The Battle Of The Bunnies

At one end of the arena stands the famous Swiss chocolate maker Lindt; they make and sell a chocolate bunny wrapped in gold foil with a red ribbon and bell around its neck. They have been doing so since 1952. Lindt manufactures over 160 million chocolate bunnies each year in over 50 countries. That’s a lot of bunnies.

At the other end of the arena stands the German discount retailer Lidl, which has 175 stores in the United States as well as thousands of stores all over Europe. They also make and sell a chocolate bunny wrapped in gold foil, albeit at a much-discounted price point than that of the Lindt chocolate bunny.

Let’s get ready to rumble! 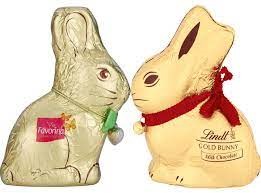 And rumble they did.

The Federal Supreme Court of Switzerland, after years of expensive and prolonged legal wrangling, finally ended the fight. The Swiss Court held that Lindt deserved protection from copycat products, including the ones sold by Lidl. The Court opined that Lidl’s chocolate bunny is confusingly similar with Lindt’s chocolate bunny; the latter is apparently protected by the trademark laws of Switzerland. As a result of this decision, Lidl is now precluded from selling its chocolate bunny; it must also destroy its stock of bunny copies.

First, the Swiss Court found that Lindt’s chocolate bunnies are well known in Switzerland, and therefore are legally protectable.

Second, the Court determined that there was a reasonable risk of confusion because of the similarities in the shapes of the two bunnies, even though there were some differences in the designs of each. The Court found that the Lidl chocolate bunnies substantially matched the shape and features of those of Lindt, making it hard for customers to distinguish between the two brands.

“Given the overall impression, Lidl’s rabbits have clear associations with the shape of Lindt’s rabbit,” the Swiss Court’s statement said. “In the public’s mind, they are indistinguishable.”

Lindt, not surprisingly, thought the decision of the Swiss Court was right on point.

In a press release, Lindt said that “[t]he ruling of the federal court is of great importance for the protection of the Lindt Gold Bunny on the Swiss market,”… “It will help to further protect the iconic form of the Lindt Gold Bunny against dilution from unauthorized copies and will likely serve as a precedent also in other jurisdictions.”

The only unanswered question was whether the knockoff bunnies of Lidl that remain in inventory, rather than being completely destroyed, could instead be melted down by Lidl and subsequently made into one or more chocolate items that do not look like the Lindt bunny. It seems the answer would have to be yes.

Indeed, the Swiss Court suggested just that. While ruling that Lidl had to destroy the infringing chocolate bunnies, the Court did also say that “this does not necessarily mean that the chocolate as such has to be destroyed.”

Lidl, in commenting on the decision, unequivocally said that no bunnies would be thrown away. This seems to make sense.