All patents are directed to inventions that are useful in some way, but not all patented inventions are likely to elicit any particular emotional response from the end-user practicing the invention. However, some inventions are specifically designed to help spread holiday cheer at various times of the year. The following are some elaborate and fun examples of holiday-inspired patents found in the archives of the U.S. Patent and Trademark Office.

U.S. Patent No. 5,523,741 is directed to a Santa Claus detector. A representative figure of the patent is presented below. 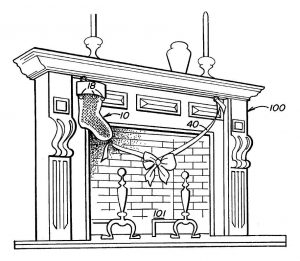 The inventor of the patent devised a method to provide children with concrete proof that Santa indeed visited them and delivered gifts on Christmas eve. Based on the premise that Santa enters through the chimney, the inventor sought to hang a ribbon across the fireplace opening to detect Santa’s arrival (see ribbon 40 above). This works as follows: the ribbon has one end tied to the fireplace structure and the other end tied to a stocking (see stocking 10 above). Santa would inevitably pull the ribbon when passing through the fireplace opening. This, in turn, would activate a switch inside of the stocking, causing the stocking to light up and play musical tunes. When the children would wake up in the morning and see that the stocking has been lit, they would understand that Santa actually visited them at night. All that a parent would need to do is wake up prior to the children and pull the ribbon.

U.S. Patent No. 6,053,622 adds a touch of magic to the way a Menorah is operated by utilizing a wand to illuminate the imitation candle lights. Fig. 1 of the patent appears below. 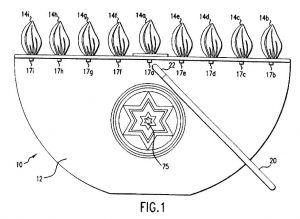 In order for this concept to work, the Menorah is provided with a magnetically operated switch for each one of its nine lights. The switches are placed inside of the Menorah (such that they are not visible from the outside), and each switch is disposed in close proximity to its corresponding light. The wand is fitted with a magnet at its distal end (see FIG. 1 above), and the magnet is configured to activate the light switches when being brought near them. Therefore, a user would simply pick up the wand and point its distal end toward a desired candle light in order to turn it on without actually contacting the Menorah. 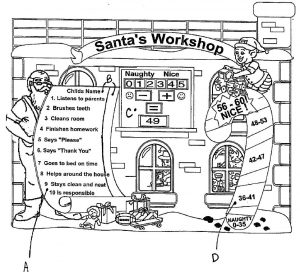 The patent application calls for a board decorated as illustrated above in order to determine whether a child has been naughty or nice during the year. The board contains a list of questions that a child must answer, and each answer will be assigned a particular score (based on what the answer is). A calculator would then be used to add up all the individual scores in order to determine a total score for the child. The child would be deemed to be naughty or nice based on that score.

Holiday-inspired gadgets need not necessarily be utilitarian in nature such as the examples above. Patent protection can also extend to the ornamental design of a particular object.

For example, U.S. Design Patent No. D623,084 protects the design of a wireframe reindeer studded with lights and adorned with a bow. See below. 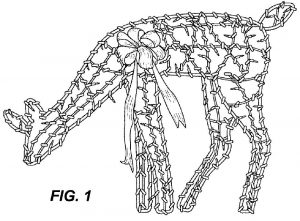 U.S. Design Patent No. D913,748 protects the ornamental design of an egg-shaped “holiday cup.” See below. 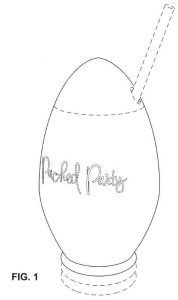 The records of the U.S. Patent and Trademark Office contain numerous other holiday-related patents and patent applications. That being said, if you believe that you have created a new and improved holiday gadget or ornament, we recommend consulting with a patent attorney in order to determine how to best protect your invention.