“Trust the Process,” the catchphrase that was associated with the Philadelphia 76ers basketball team has been taken to another level by Joel Embiid, a Cameroonian player on the 76ers. On May 14, 2019, the USPTO granted Embiid a trademark registration on his personal mantra “The Process” under Registration No. 573180. The registration, issued in the name of Joel Embiid c/o CAA Sports LLC (of California), covers “apparel, namely, shirts, sweatshirts, shorts, sweatpants, hats, flip flops.”

Embiid filed an application for THE PROCESS in October 2016 covering apparel on the basis of intent to use. Subsequent to the approval and allowance of his application for registration, Embiid submitted an image from a website displaying the phrase THE PROCESS adorning the front of an Under Armour t-shirt to satisfy the use requirement of the mark on the goods covered in the application. See below for the image submitted to the Trademark Office.

It is fundamental that trademark protection is granted to those words, phrases and designs which function as trademarks. To function as a trademark, such a word, phrase or design must serve to indicate source, a symbol of the goodwill of the company that manufactures, produces, or distributes goods under a name phrase or design. Accordingly, the granting of a trademark registration on a common phrase may come as a surprise to some as the phrase “THE PROCESS” adorning the front of a t-shirt as shown on the Under Armour t-shirt above would be viewed as merely ornamental rather than an indication of source.

It would seem to be axiomatic, then, that material that is purely ornamental is not entitled to protection as a trademark. While not everything appearing on the front of clothing is seen as ornamental, a small, neat and discrete wording/design located on the pocket or breast portion of a garment (for example, a small design of an animal) may create the commercial impression of a trademark, whereas a larger depiction of the same wording/design prominently displayed across the front of a garment is more likely seen as a purely decorative or ornamental feature of the goods. Matter that is purely ornamental or decorative does not function as a trademark and will not be registered. TMEP Section 1202.03 (a). The size, location, dominance and significance of a word, design or phrase are factors used to determine whether the mark serves as an indication of source.

Upon closer examination of the image Embiid submitted, you can see the phrase “THE PROCESS” in smaller font appearing on the bottom left sleeve bordering the “UA” logo. This discrete use on the sleeve appears to be adequate trademark use, thereby precluding a potential ornamentation refusal in the Trademark Office. 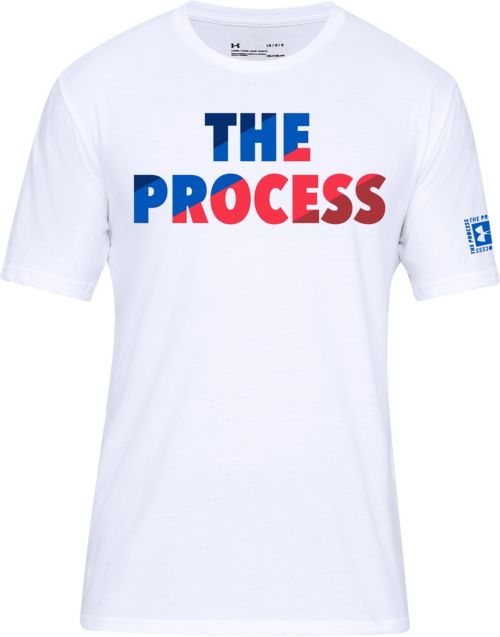 Additionally, the textual description of “UA Embiid The Process” appearing on the web page on which the t-shirt is displayed is sufficient to show use because “THE PROCESS” is associated with the sale of t-shirts, the t-shirts are pictured on the web page and the ordering information is provided.

Judging from the amount of pending applications in the USPTO, Embiid certainly “trusts the process.” Not only has he filed thirteen intent to use applications of the phrase “THE PROCESS” since October 2016, but has filed eight applications of the phrase “TRUST THE PROCESS” since November 2018 covering a broad range of goods and services. Indeed, Embiid has become synonymous with “THE PROCESS” and this phrase has become well-known as an indication of source for goods and services marketed under Embiid’s mantra. For example, in pending Application No. 88202895 of the phrase TRUST THE PROCESS covering a line of non-alcoholic beverages, inclusive of bottled Shirley Temple drinks, the Trademark Examiner requested a signed consent from Embiid on the grounds that “THE PROCESS” identifies a living individual and therefore Joel Embiid’s signed Consent* is required to register this phrase.

These numerous filings by Joel Embiid of the phrases “The Process” and “Trust the Process” are sure to spark a flurry of third-party applications for celebrity mantras. In fact, rapper Cardi B. recently filed two trademark applications for her fun catchphrase OKURRR based on intent to use covering clothing and paper goods respectively.

*Although the applications are filed in Joel Embiid’s name individually, his lawyer signed the application on his behalf and therefore, his signed consent was not made of record in the several applications.