They say that beauty is only skin deep, but globally the beauty industry is growing exponentially and only getting stronger with an estimated value of $511 billion in 2021, up from $480 billion in 2020.  New brands are appearing in the skincare and makeup space all the time, many of which are owned by actors, musicians and other celebrities, including Kylie Jenner’s Kylie Cosmetics and Rihanna’s Fenty Beauty.  Arguably, one of the biggest celebrity skincare brands right now is Kim Kardashian’s SKKN BY KIM brand.  As we have seen at the U.S. Trademark Office (“USPTO”), the Kardashian clan has been frontrunners in celebrity branding and are well aware of the importance of protecting their famous names.  There is nothing the Kardashian clan love more than another trip to the USPTO, and there is no stopping Kim Kardashian in her efforts to federally register the mark SKKN BY KIM and to maintain her continued use of this name on her heavily promoted (and successful) skincare line.  Since Kim’s filing of 19 trademark applications of SKKN BY KIM in the spring of 2021 under her company Kimsaprincess, Inc, of California, we have been keeping up with the trademark drama.  The status of the now 20 pending applications along with Kim’s ongoing battles for her right to coexist with SKKN+ of Beauty Concepts  are presented below

Upon examination in the USPTO, the examiner requested a disclaimer of the word SKIN on descriptiveness grounds for goods and services relating to skincare.  Per USPTO practice, a novel spelling or intentional misspelling will still be found descriptive if purchasers will perceive the different spelling as the equivalent of the descriptive word.

Unbeknown to Kim and her attorney on the March 30, 2021 filing date of the above 19 applications in the name of Kimsaprincess Inc., Beauty Concepts LLC of Washington D.C. had filed an application for the mark

with the USPTO just two days earlier.  Not only does Beauty Concepts’ application have an earlier filing date than the applications of SKKN BY KIM, but also alleges a date of first use of the mark SKKN+ as early as August 1, 2018 in connection with skin care salon services.  This use was based on a single beauty salon located in Washington, D.C. at the time of the filing.  A copy of the screenshot of the website of https://www.skknplus.com/ submitted in support of the use of SKKN+ by Beauty Concepts is reproduced below: 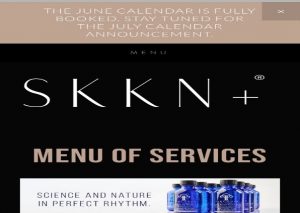 The details of Beauty Concepts’ pending application filed on March 28, 2021, along with its two later filed applications of the mark SKKN+ [word mark only] are shown below:

On July 20, 2021, Beauty Concepts, a Washington, D.C. LLC filed a new entity for doing business in the state of New York in the name of SKKN PLUS LLC with the Department of State.  See below. The next day SKKN+ salon owner Cyndie Lunsford sent Kardashian a cease and desist letter asserting her prior rights in the 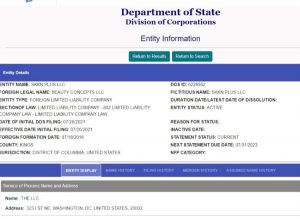 Even if the owner of a foreign trademark application meets the two threshold requirements discussed above, the following requirements must also be satisfied in order to receive a priority filing date under Section 44(d):

Since the Jamaican application was the first application filed by Kimsaprincess for the mark SKKN by itself and was filed with the USPTO within six months of the foreign filing date, the U.S. application of SKKN met the threshold of receiving the earlier filing date of January 25, 2021 giving Kim a 60-day priority over Beauty Concepts’ pending application of

Rather than requesting a disclaimer of the term SKIN as was done in Beauty Concepts’ application, the trademark examiner refused registration of Kim’s priority application of SKKN on descriptiveness grounds. Since the entire mark consisted of the term SKKN, Kim could not simply disclaim the term SKIN apart from the mark absent an additional registrable element.  Contrast this with the disclaimer request in the applications of SKKN BY KIM and SKKN+.  Kim’s application of SKKN remains suspended pending the outcome of Beauty Concepts’ oppositions.

To date, Beauty Concepts has filed three opposition proceedings with the Trademark Trial and Appeal Board (“TTAB”) with several more likely on the horizon given the recent publication of additional applications of SKKN BY KIM. These oppositions filed on December 27, 2021, January 6, 2022, and July 15, 2022, essentially assert Beauty Concepts’ prior common law rights in SKKN+ in connection with skin care salon services since 2018 and allege a likelihood of reverse confusion between its mark SKKN+ and SKKN BY KIM.  Beauty Concepts allege that the addition of the wording “BY KIM” does not distinguish Kim’s mark or otherwise obviate the likelihood of confusion.  The TTAB will suspend these several oppositions pending the recently filed lawsuit against Kim and her company.

Beauty Concepts makes similar arguments in its federal lawsuit filed on June 28, 2022 with the Eastern District of New York. The lawsuit brings claims for willful infringement of Beauty Concepts’ trademarks, reverse confusion, unfair competition, and civil conspiracy, alleging that Kim has deliberately disregarded Beauty Concepts’ superior rights to the “SKKN” mark and that the use of the SKKN BY KIM mark “will and have confused, misled, and deceived the general public and consumers into believing that Beauty Concepts manufactures, sells, sponsors, approves and/or licenses the Kardashian/Coty’s goods and services,” resulting in damage to Beauty Concepts’ SKKN+ mark. 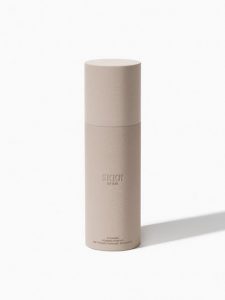 Moreover, Kim owns the domain name www.skkn.com which redirects purchasers to the www.skknbykim.com website.  Kim has also claimed @skkn on social media platforms, all of which lead to her SKKN BY KIM Instagram, Tik Tok and Twitter accounts.

Due to the pending lawsuit, either party is able to make a motion to suspend the TTAB proceedings.  To date, neither party has filed a motion to suspend with the TTAB.  If Kim loses the TTAB dispute, she will be unable to obtain a trademark registration of the mark SKKN BY KIM,  but may otherwise continue to use SKKN BY KIM and SKKN to market and sell her line of skin care products in the marketplace.  However, if she loses the lawsuit in federal court, she may be forced to cease use of the mark entirely.  Beauty Concepts is seeking both injunctive relief and damages in its complaint.  If the court grants Beauty Concepts its desired relief, Kim will be forced to halt all sales of products under SKKN BY KIM until she ceases use of the term SKKN.

Although Kim maintains that she has done nothing wrong in continuing to market and sell her SKKN BY KIM branded cosmetics, no formal answer has been filed in response to the complaint.

It is a never ending drama of keeping up with the Kardashian trademark shenanigans and this former trademark examining attorney will try to stay up to date in the USPTO.