Skip to content
Publications > Is Your Ink Protected by Copyright?

Copyright law has not caught up with the increasing popularity of tattoos in mainstream U.S. culture. A handful of tattoo copyright infringement claims have been brought recently, most settling before a court ruling. The lack of case law and absence of specific mention of tattoos in copyright statutes contribute to the ambiguity in tattoo copyright law, with some guidance provided in the context of video games and athlete’s tattoos. 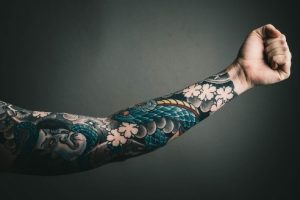 In Solid Oak Sketches, LLC v 2K Games, Inc., 449 F. Supp. 3d 333 (S.D.N.Y. 2020), Solid Oak Sketches held the licensing rights of a group of tattoo artists who created tattoos on pro basketball stars, including LeBron James, Kenyon Martin, and Eric Bledsoe. Solid Oak Sketches claimed that those rights were infringed when the defendant creator of the video game NBA 2K included images of these players in the game, including their tattoos. The plaintiff’s claims were dismissed on summary judgment based on the defendant’s meritorious defenses:

The court provided some guidance on the determination of fair use in tattoo copyright suits:

The Solid Oak decision is significant as a definitive court ruling that tattoos are copyrightable works and provides defendants in future tattoo copyright infringement cases with three available defenses.

A well-known case involved the tattoo artist who created Mike Tyson’s famous tribal face tattoo. Victor Whitmill had a copyright registration for the tattoo design and sued Warner Brothers for copyright infringement when he saw promotions for the movie The Hangover II. In the movie, Ed Helms’ character wakes up following a night of drinking to find he had been tattooed with a replica of Mike Tyson’s face tattoo. That image was extensively used by Warner Brothers in promoting the film and was even displayed on the cover of the DVD (which has since changed). It seems that the tattoo artist had a strong case but unfortunately there was no ruling and the case settled.

A recent case filed in the U.S. District Court for the Central District of California, Sedlik v Drachenberg, No.2:21-cv-01102 (C.D. Cal. 2021), may help shed some light on the rights and limitations of tattoo artists (unless it settles, too). Here, unlike in the above cases, the tattoo artist was accused of infringing a copyrighted image. Celebrity tattoo artist Kat Von D (star of the TV show “LA Ink”), was sued by photographer Jeffrey Sedlik for infringing his copyright in a photograph of jazz musician great Miles Davis. Kat Von D copied the photograph and used it as a tattoo.  According to the complaint, Sedlik created the portrait of Davis around 1989, and it has been widely published in magazines around the world and featured by Life magazine in its annual “Picture of the Year” issue. Since its creation, the iconic representation of Davis has been affixed to t-shirts and posters under license from Sedlik, who owns a copyright in the photograph.[1]

Kat Von D used Sedlik’s photograph as a reference to create a tattoo on a client’s arm, publishing her creation of the tattoo in several pictures posted on social media, including on her Instagram account that boasts 7.5 million followers. As shown in the below screenshot of Kat Von D’s Instagram account, Sedlik’s portrait is visible at the center of the post and Kat Von D can be seen tattooing  on the client’s arm: 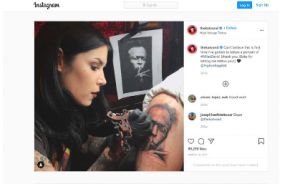 Some commentators, such as Arianna D. Chronis, have suggested that definitions of “tattoo,” tattooist,” and “tattooed subject”  should be added to the Copyright Act and that the following statutory language should be inserted in 17 U.S.C. §§ 102 and 106B [2]:

§ 102 – Subject matter of copyright: In general

(a)…Works of authorship include the following categories:

(9) tattoos and other similarly indelible forms of body art

(i) Human skin qualifies as a “tangible medium” as used in section 102(a).

§ 106B – Scope of non-exclusive rights of tattooed works

(a) The tattooist is considered the author and is subject to the rule of initial ownership outlined in section 201(a).

(1) To display the tattooed work publicly;

(2) To reproduce the tattooed work through photography, film, and any other visual media; and

(3) To utilize the tattooed work in any exercise of the subject’s right to publicity.

Including these statutory provisions would clarify copyright law for tattoos, as well as the rights and limitations of tattoo artists and tattooed subjects.  However, there is no legislation pending before Congress that would enact such an amendment.

The reality is that many people have tattoos of celebrities or animated characters but few tattoo artists or tattooed subjects are sued or even licensed. That may be because the celebrities or animation companies are unaware of the tattoos or they do not want to alienate their fans. Kat Von D’s tattoo was shared with millions of her followers and Sedlik is seeking substantial monetary damages and injunctive relief. This case is a reminder that it is not best practice for a tattoo artist to copy a drawing or other artwork without a license and if they do, they may be sued for copyright infringement. On the other hand, if the tattoo artist created the design, then they own all of the rights to its usage and the design should be registered with the Copyright Office as soon as possible. The tattooed subject has permanent physical possession of the design on their skin, but still needs to remember that the design is owned by the tattoo artist, so they should check with the tattoo artist before showing it off on social media.