Now you can trademark things you wouldn’t say to your grandmother. 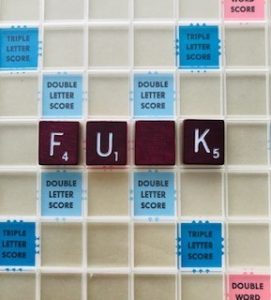 Section 2(a) of the Lanham Act prohibits the registration of any trademark that “[co]nsists of or comprises immoral, deceptive, or scandalous matter”.[1]And so, for decades, U.S. law prohibited registering marks that were profane or vulgar.

That all changed a few years ago, when Erik Brunetti applied to register the mark FUCT for his clothing brand. The examining attorney refused to register the mark under Section 2(a) of the Lanham Act on the ground that FUCT is an extremely offensive and vulgar word, and therefore scandalous. Brunetti appealed and the case was ultimately heard by the Supreme Court. The Trademark Office urged the Court to keep the “immoral or scandalous” provision banning the registration of vulgar, lewd, sexually explicit, and profane marks. The Court rejected the argument, however, finding that the statute does not draw the line at lewd, sexually explicit, or profane marks. The Court determined that although many would consider the term FUCT to be immoral or scandalous, to prohibit registration of a trademark discriminates against the trademark’s message, violating the free speech clause of the First Amendment.[2] In so ruling, the Supreme Court invalidated the “immoral and scandalous clause” of Section 2(a) of the Lanham Act as viewpoint discrimination. The Court discussed its earlier decision in Matal v. Tam[3] (that case involved an application to register the mark “The Slants” for the name of a rock band of Asian descent), where it held that racially disparaging trademarks are private, non-government speech, and that refusing to register them violates the First Amendment.

Since the Supreme Court’s ruling, the number of applications to register “immoral or scandalous” marks at the Trademark Office has increased.[4]

Indeed, Erik Brunetti is back at it again, this time fighting for four applications for FUCK cell phone cases, jewelry, bags, and retail services, which were refused registration by the examining attorney on the ground that FUCK does not function as a trademark to identify the source of Brunetti’s goods or to distinguish them from others.[5] On appeal, the Trademark Trial and Appeal Board acknowledged that immoral or scandalous matter is no longer a bar to registration but nevertheless affirmed the examining attorney’s refusal to register on the basis of FUCK’s failure to function as a source indicator, since the word expresses a well-recognized, commonplace term that merely conveys a familiar sentiment, and should therefore remain free for others to use.[6] The Board noted that the more commonly a term is used, the less likely it is that the public will view it as identifying only one source or recognize it as a trademark. Brunetti argued that there is no “commonplace words doctrine,” and that since the Supreme Court held that FUCT can serve as a valid trademark, there is no basis to assert that FUCK is somehow different. Brunetti accused the Board of “thumbing its nose at the highest court in the land” and suggested that the Trademark Office’s bias against him was the source of his trouble, but the law had moved on. The issue in Brunetti’s newest case was different–it was not a question of whether  profanity could be registered, but rather a question of whether a mark functioned as a source indicator.

The Trademark Trial and Appeal Board may have found a way to circumvent, at least in part, the Supreme Court’s holding that prohibiting the registration of immoral or scandalous trademarks is unconstitutional. We’ll have to wait and see if Brunetti appeals the Board’s refusal to register his FUCK applications.

[5] Brunetti currently has seven active registrations for FUCT and ten pending applications for FUCK, FUCKIT, FUCT, F.U.C.T., FUCKIT FRIDAYS, and FUCT UP in the U.S. Patent and Trademark Office.