The Kardashians have been frontrunners in celebrity branding and are certainly no strangers to the importance of protecting their famous names with the U.S. Patent and Trademark Office.

More than seven years after the launch of the brand KARDASHIAN BEAUTY by Kim Kardashian and her celeb sisters for a line of hair and cosmetic products, brand-savvy Kim has made several attempts at developing the next mega-brand.  After filing numerous intent to use applications of the marks KKW, KKW BEAUTY, KKW FRAGRANCE, KKW SKIN and KKW HOME over the past three years for use on an extensive line of beauty, skin, fragrance, apparel, toy, home furnishing products and retail store services on behalf of her company Kimsaprincess Inc., along with taking the California bar exam, the recently separated Kardashian is back at the USPTO with an entirely new brand which incorporates her initials sans the “W.” On March 30, 2021, Kimsaprincess Inc. filed 19 intent-to-use applications of the mark SKKN BY KIM covering a wide variety of goods and services which extends beyond beauty and entertainment services   The details of all 19 applications reflecting the wide range of goods and services intended to be marketed, sold and distributed under the SKKN BY KIM brand are:

As these applications were filed just two months ago, none have undergone an initial examination in the USPTO.  Given that the current first action pendency of five months, which is the period of time between the application filing date and date of the examining attorney’s first office action, these applications are not likely to be reviewed until sometime in August or September 2021.

Upon examination in the Trademark Office, the term SKKN is not likely to be found descriptive although the pronunciation of this term could  be “SKIN.”  While the word SKN has been typically found descriptive or even generic in applications covering goods and services related to skin care https://www.ascendcenter.com/studio/popups, there is no evidence that the term SKKN will subject to a similar finding.  In looking at the numerous applications and registrations of marks containing the term SKN in class 3, the word “SKIN” was disclaimed apart from the mark on the ground that SKN is considered to be the phonetic equivalent of the descriptive term SKIN. A novel spelling or intentional misspelling will still be found descriptive if purchasers will perceive the different spelling as the equivalent of the descriptive word.  TMEP §1209.03(j).  As evidence in support of the disclaimer in many of these class 3 applications of marks containing SKN, the examining attorney attached evidence that SKN is an abbreviation of SKIN.  See the examining attorney’s evidence consisting of a listing from https://www.abbreviations.com/SKN in support of finding that the term SKN is descriptive of skin care, cosmetic and body products.as: 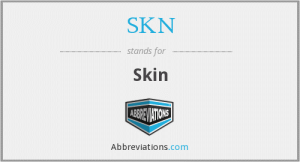 Contrast this with the term SKKN in Princes Kim’s applications of SKKN BY KIM:  SKKN appears to be a play on the descriptive term “SKIN” while also incorporating her KK initials (after dropping the W from her name). Very clever branding indeed!

Moreover, the examining attorney is unlikely to find sufficient evidence that SKKN is a common abbreviation of the descriptive term “skin” or other descriptive significance.  In checking the sources that the examining attorney referenced in finding the term SKKN descriptive, there is no similar abbreviation evidence for SKKN as can be seen at https://www.abbreviations.com/SKKNAccordingly, the applications of SKKN BY KIM are not likely to encounter any disclaimer issue.

Third party’s use and pending applications of SKKN

In searching the USPTO database, SKKN BY KIM may be the only listing for a SKKN mark in class 3 but there is a recently-filed application of the mark SKKN+, which may be problematic to some of Kim’s applications.  Here are the details:

Unfortunately for Kim, this application of SKKN+ covering skin care and beauty salon services in class 44 was filed just two days before the filing date of all 19 applications of SKKN BY KIM!  Beauty Concepts LLC filed its application based on use in commerce on March 28, 2021 – two days earlier than the March 30, 2021 filing date of Princess Kim’s 19 applications.  Not only does this application have an earlier filing date than SKKN BY KIM, but also claims that the mark SKKN+  has been used interstate commerce as early as August 1, 2018, in connection with skin care salon services.  A copy of the screenshot of the website of https://www.skknplus.com/ submitted in support of the use of SKKN+ by Beauty Concepts is reproduced below: 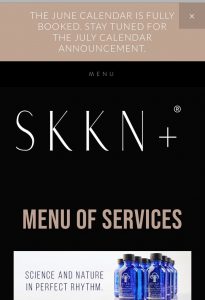 At the very least, Kim’s applications covering classes 3 and 44 (and possibly additional applications covering related classes of goods) are likely to be suspended until Beauty Concepts’ earlier-filed application either issues to registration or abandons.  According to the Trademark Manual of Examining Procedure, the addition of “BY KIM” to the otherwise highly similar SKKN marks will most likely not be sufficient to overcome a potential refusal.  The likelihood of confusion is not necessarily avoided between otherwise confusingly similar marks merely by adding or deleting a house mark or other distinctive matter; if the dominant portion of both marks is the same. TMEP 1207.01(b)(iii). Should the examining attorney find that the term SKKN is descriptive as used on skin care-related goods and services, Princess Kim can successfully argue that “BY KIM” is the more dominant portion of the mark for purposes of branding and trademark significance.

If Beauty Concepts ultimately obtains registration for SKNNN+ and any of Princess Kim’s applications are refused on the ground of a likelihood of confusion, she may wish to request a letter of consent from Beauty Concept’s.  As can be seen from the Trademark Trial and Appeal Board’s database at https://ttabvue.uspto.gov/ttabvue/,  the Kardashian sisters are no strangers to filing interparty proceedings with the TTAB in actively enforcement of their rights in their brands.  Not surprisingly, most of the disputes end up with a default judgement in favor of the Kardashians.

Of much less interest and relevance, there is a second recently filed application of the mark SKKN filed six weeks after the filing date of SKNN BY KIM. See below: 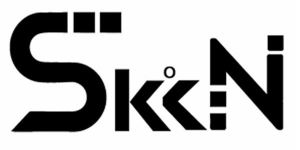 Although this later filed application of covering leather bags, suitcases and wallets has a later filing date, the application asserts a date of first use of September 24, 2018, which is earlier than the filing date of Kim’s.  Although Kim’s application does not claim that her initials “KK” in the mark represent Kim Kardashian, this application claims that the KK represents the name of the applicant and “S” and “N” have religious values.  Unfortunately, claiming a personal stake in a mark does not bestow any special trademark superpowers.  While Kamal has common law rights in since 2018, the alleged interstate commerce use of May 1, 2021, would preclude any potential inter-party TTAB dispute with Kimisaprincess.

Meanwhile, Kim does not yet appear to be using SKKN BY KIM on any of the goods or services covered in these applications.  As a condition to registration of any of these intent-to-use applications, Kimsaprincess will have to submit legitimate use of SKKN BY KIM in each of the respective applications.  The good thing is that there is plenty of time to figure that out.

Of course, this is all mere speculation of a probable examination of the SKKN BY KIM applications but it is certainly fun for this former examining attorney trying to keep up with the Kardashians in the USPTO.